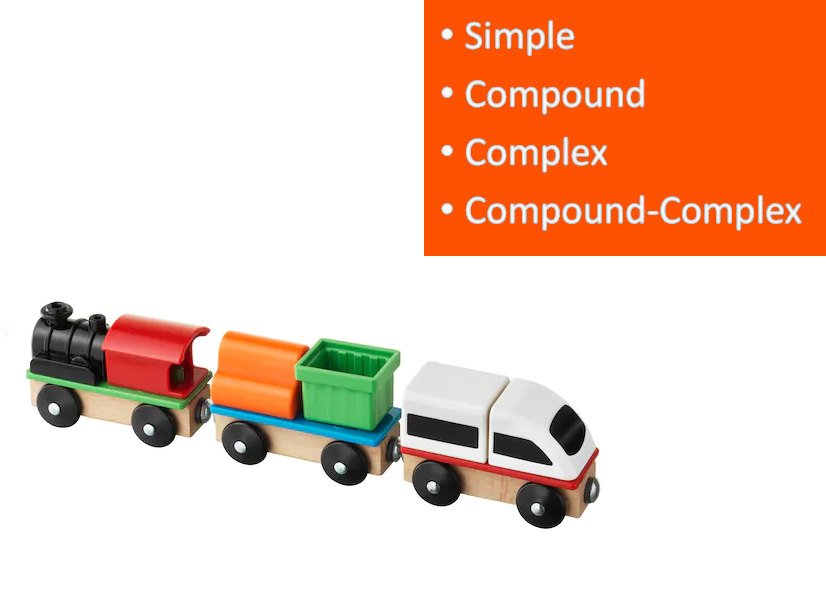 Good sentence structure comes fairly naturally to native speakers of English. Another way of putting that is that they have an implicit knowledge of it—they can make proper structures but may not be able to explain how that works.

For non-native speakers though and those who wish to write at an advanced level, an explicit knowledge of the building blocks of sentences can be useful. Luckily, the basics of sentence structure are not very difficult to understand.

Before we begin, it’s worth noting the difference between a sentence and a clause.

A sentence is generally defined as a complete thought that starts with a capital letter and ends in a full stop, an exclamation point, or a question mark (note that sentences only properly apply to written texts and not to the spoken word—where punctuation is not specified).

The following are all sentences:

A clause, on the other hand, consists of the part of the sentence containing the verb and its complements. By complements here, we mean everything that the verb needs (given its form and type) to make it complete. Complements can include subjects and objects etc.

The following are all clauses:

She is wearing a sombrero

This contains the verb “to wear”:

The form of the verb is the present continuous, “is wearing“. And this requires a subject. The subject is “she”.

The type of verb here is transitive. That means it requires an object. The object here is “a sombrero”.

Because above we have both the required subject and the required object along with the verb, we have a clause. Take either away and we wouldn’t.

She is wearing ≠ a clause

is wearing a sombrero ≠ a clause

Also, note that the clause could both be a sentence:

“She is wearing a sombrero“.

Or part of a sentence:

Because it can stand independently as a sentence, we call it an independent clause.

Here’s another example of a clause:

Which was really annoying

This contains the verb “to be”.

The verb form is the past tense, “was”. This requires a subject. The subject is “which”.

Again, everything the verb requires grammatically is present, so we do have a proper clause.

However, strictly speaking, this clause can only be a part of a sentence as “Which was really annoying” does not express a full thought.

A full thought and a proper sentence would require another clause. For example: “The wind blew her sombrero into a ditch, which was really annoying“.

Because of this lack of independence, we call the clause in question dependent rather than independent.

Getting back to sentence structure; sentences are made up of combinations of these independent and dependent clauses. And there are four main types as follows:

The reason for the downturn in the economy was the lack of investor confidence.

The reason for the downturn in the economy was the lack of investor confidence and that lead to the depression.

The reason for the downturn in the economy was the lack of investor confidence, which was caused by the weakness of the currency.

The reason for the downturn in the economy was the lack of investor confidence, which was caused by the weakness of the currency, and that lead to the depression.

Now, if the above makes sense, a couple of common errors to avoid should also become obvious.

(i) A comma splice (a type of run-on sentence) is when commas are used to link independent clauses together rather than the appropriate linking word or punctuation.

Governments should educate citizens about healthy lifestyles, smoking should be discouraged.

The way to solve this is to insert an appropriate punctuation mark or coordinating conjunction.

Governments should educate citizens about healthy lifestyles; smoking should be discouraged.

Governments should educate citizens about healthy lifestyles, and smoking should be discouraged.

Although the rate of CVD has been reduced in some areas. It is still rising in others.

A simple comma is the best fix here.

Although the rate of CVD has been reduced in some areas, it is still rising in others.

So, those are the basics. It’s important to note though that the big picture concerning both sentences and clauses is a little more complicated than this. There are sentences that have no clauses at all (e.g. “Oh?”, “What!”, and etc.), and dependent clauses can sometimes be legitimately used as sentences, especially for stylistic effect (e.g. “Because I said so!”) though this does not usually occur in formal writing.