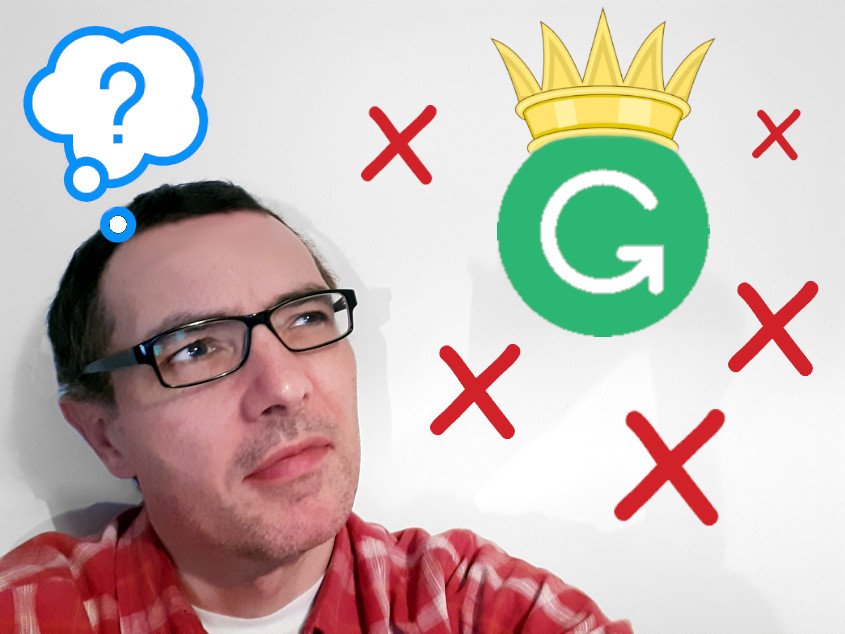 On the face of it, grammar checkers seem like a good idea. English grammar is difficult enough to cause problems for even the most intelligent of writers, and the promise of the grammar checker is to take the pain out of the process. This is a promise that is constantly reiterated through the marketing and promotion of these software tools.

In reality though, language is much more complicated than we often imagine. It’s not a simple set of rules that can be plugged into an algorithm that then allows a software program to deliver perfect results. Context is all-important. And more often than not, grammar checkers can do little more than make an educated guess at correct context and regularly get it wrong despite their claims.

Grammarly is the most aggressively promoted grammar checker out there and—aside from MS Word’s inbuilt tools—the most used. But despite the swish campaign and hyped promises, it’s riddled with issues that prevent it from being a serious writer’s aid (though it is often good at picking up simple things that may have been overlooked).

To investigate Grammarly’s performance, I turned on the Chrome extension so that it would check some of my blogs in progress, including this one. The results were interesting, if not encouraging.

Note: Grammarly underlines what it perceives as mistakes in red and gives a description of the supposed error when you hover. For clarity, I’ve taken screenshots of the marked words in context and will explain below Grammarly’s suggestions and the issues with them.

Here, Grammarly is not sophisticated enough to realize the preposition “in” can be used before the adjective “formal” and defaults to presuming I meant “informal”. Total fail. But easy to spot.

Bad news: Grammarly doesn’t notice the missing preposition “at” before “least”. Odd, as this is the more serious error.

More forgivable here; Grammarly gets confused by my making a list of words. The suggestion (which was that I remove the comma after “the”) is not of much help though (“This, these, the such”??).

Innovation within business = business innovation. Grammarly didn’t understand I was using the abstract noun “business” and not mentioning a particular business, so it suggested an article “a/the” here. Fine for me, but potentially confusing/misleading for a non-native speaker or anyone with a less developed knowledge of grammar.

The word “thesis” clearly requires an article here. “The thesis” would have been a sensible suggestion, but, inexplicably, Grammarly misses it completely.*

*As of March 2020, a Grammarly update has apparently solved this problem and the issue is now recognized.

From this very blog post (see above), Grammarly makes three errors in one paragraph! And exemplary of my point as that is, it was not at all by design.

Grammarly suggests a comma after “In reality”, missing the fact that the following “though” is part of the introductory phrase.

Grammarly thinks “make” should be “making”. This is very shoddy and seems to be simply reliant on the preceding “than”, with no other attempt at context considered.

“Correct” is marked an error. Grammarly insists on a preceding article, “the”. But “correct” in the phrase “correct context” meant generally is correct.

Grammarly false positives false positive! Again, serendipitous as this is, I am not making it up. So, sure, its suggestion, “false-positive”, is useable, but as the dictionary.com snapshot shows below, there’s no need for it.

(Grammarly also just missed the fact that I used “false positive” as a verb. But perhaps the point has been sufficiently made already.)

Less Is Not Great But It’s Still More!

Sadly, some of the most serious issues affecting Grammarly are confined to users who fork out for the (rather expensive) paid version of the software. This is because “advanced issues” are just the type of things grammar checkers are worst at dealing with. And while simple grammar checkers will ignore problems in these areas, they will also not lead you astray. So, if you want to write the phrase “plain shirt”, the advice to change it to “plaid shirt” (an actual advanced Grammarly miscorrection) is worse than useless, especially if you’re a non-native speaker and need to look up what “plaid” means.

I’d give more examples, but at thirty dollars a month, I’m not about to buy their paid version even to expose its faults in detail. And I’m pretty sure that they’re not about to give me a freebie for doing so.

So, here we have an example of software that’s both too smart (it seems to take a lot into consideration) and not smart enough (this often just leads it further astray) for its own good. The money spent on Grammarly’s millions of ad placements might have better been used to mitigate its problems. But don’t expect major changes any time soon.

It may not be your first thought on using a grammar checker, but privacy may be an issue you need to be aware of. Excepting restricted fields, such as passwords, Grammarly logs and stores your information, and a recent vulnerability in the program (thankfully quickly dealt with) meant hackers could potentially access your data through its software. Remember, anything you plug into a browser is potentially leaky, and Grammarly is no exception.

I’ve focused on Grammarly a lot here because, despite its (limited) usefulness, it’s certainly the most obvious example of overhyped software in this area. It’s not so much that other programs do things much better, but that they don’t overreach themselves in the way Grammarly does. And this is indicative of the state of technology we’re at now. So, sure, get a grammar checker but get one that’s free and don’t expect too much.

Hang on a Sec…

Yes, I run a proofreading and editing business, so grammar checkers are in some (albeit limited) sense part of the competition. That makes me less than totally unbiased. However, if in any doubt, check out other reviews of Grammarly across the internet. You’ll find very similar criticisms to those here from other commentators not connected to this business.

And I’ll just leave you with this: