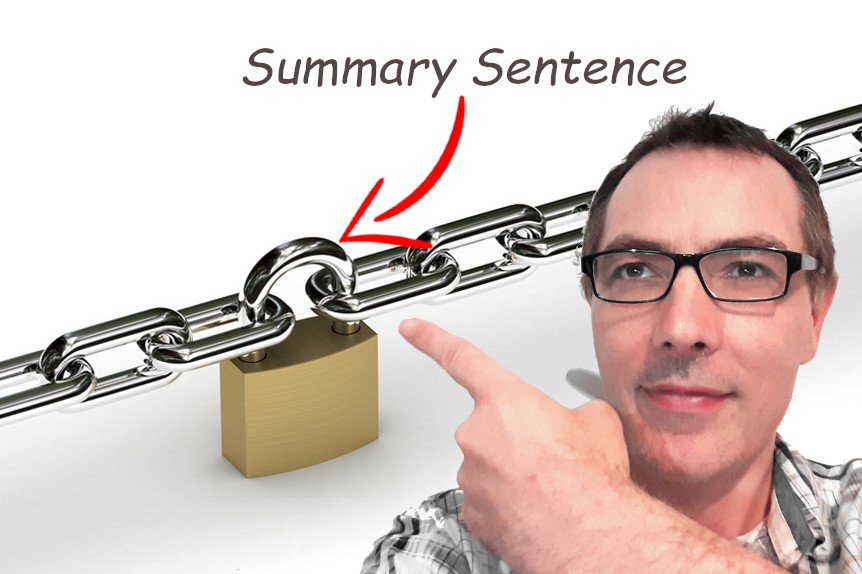 (Scroll to the bottom if you would rather a video version of this blog. Or read and then watch!)

You will often find summary sentences at the end of body paragraphs in academic essays. This sentence type is not generally compulsory, but a good one may help with your essay’s overall cohesion and coherence. Here’s an example (bolded).

Although the education available in wealthy countries is the best in the world, education systems in these countries are experiencing serious financial difficulties. Public education is extremely costly. For example, in 2017, EU countries spent €175 billion on this sector. In the UK alone, the figure was almost £70 billion. A similar trend is noticeable in other developed countries around the world. For instance, in the United States, total education spending during the same period was more than $700 billion. Even more problematic is that education costs are showing rapid increases. In the U.S., for example, the current rate of increase is far outpacing inflation. A continuation of this trend is likely to have several serious effects on the economies of developed countries.

The name “summary sentence” is somewhat misleading as it implies that the sentence simply summarizes information, and that’s not how it should function. In an academic essay, the summary sentence should be more sophisticated than a simple repetition of the main idea of its paragraph. (Note that summary sentences are also sometimes called “concluding sentences” although they don’t necessarily draw conclusions either.)

One function of a summary sentence can be to create a link with the paragraph that follows. But it should not just explain what the next topic sentence will be. Instead, it should show an important connection with the main idea of the next paragraph. Using the same example as above, we can see how this works:

…United States, for example, the current rate of increase is far outpacing inflation. A continuation of this trend is likely to have several serious effects on the economies of developed countries.

One serious effect is increasing deficits and public debt, which are approaching unsustainability in several developed countries. Japan, for example, has a total…

So, we can see what’s been done here; the summary sentence mentions that negative effects will follow the increasing costs of public education (i.e. the topic of the first paragraph) and the topic of the next paragraph describes one of these effects. Now, you have a neat link that doesn’t involve unnecessary repetition.

That’s how to do it. But how about how not to do it. If you can’t make a decent summary sentence, you shouldn’t make one at all. And you should be able to recognize the difference. Below, for example, are two poor summary sentence alternatives for the same body paragraph.

1. …inflation. So, as is apparent from the above, the financial difficulties of education systems in developed countries are very serious.

Why is it poor? Because it simply repeats/rephrases the topic sentence of the paragraph it’s in. No link is established with what’s to come and no new information is given. In short, it’s superfluous.

2. …inflation. One effect of this issue is increasing deficits in developed countries.

What about this one? It does establish a link it seems. However, because it specifies the topic of the next paragraph, it again causes repetition (as you can see below if you read the two sentences together).

…inflation. One effect of this issue is increasing deficits in developed countries.

One serious effect is increasing deficits and public debt, which are approaching unsustainability in several developed countries. Japan, for example, has a total…

So, what have we learned here?